Paul Newman might have said that in contracts, boring can be a real cool hand

[EDITED] In a scene from the classic movie Cool Hand Luke, Paul Newman takes the pot in a poker game after the last other player drops out.  Bystander George Ken­nedy reaches in and turns over New­man’s cards to reveal … nothing.  Ken­nedy mocks the other player, saying “he beat you with nothin’!”  Newman smiles and says, “Yeah, well, sometimes nothin’ can be a real cool hand.”

Contract professionals might riff off of that line:  Sometimes boring can be real cool. Many such folks would disagree with legal-writing expert Bryan Garner when he as­serts categorically (in a fine article) that the end of a sentence is sup­posedly its most im­por­tant part be­cause the end of the sentence packs the most punch. See Bryan A. Garner, How to start a sentence: Con­sid­er all your altern­a­tives, and sprinkle in some con­junc­tions, too (ABAJournal.com).

In a contract, it’s less important for the writing to pack a punch than it is for each sentence to make its point quick­ly, precisely, and under­stan­d­ably, so as to help speed up legal review and get the contract to signature soon­er.  And that will usually call for the kind of boring, just-the-facts-ma’am style — Alice will do X, Bob may do Y — that Garner urges writers to avoid.  [EDIT: See the end of this post for a Twitter discussion between Garner and me.]

Now to be sure, someone drafting a legal brief wants the brief to catch and hold the judge’s at­ten­tion. And in that setting, Garner is certainly right when he says that it can be bor­ing for the writer to just keep chugging along with plain old subject-verb-object sentences:

As professional rhetoricians, readers of this column should know what the most important part of a sentence is: the end. Many writers mistakenly think it’s the beginning: They begin a disproportionate number of sent­en­ces with the grammatical subject, and they rarely depart from the subject-verb-object pattern.

Boring legal writers create paragraphs of sentence after sentence begin­ning with a client’s or litigant’s name; interesting writers, by contrast, spice their prose with syntactic variety.

Notice how the poignancy is lost if we were to write: “John died last April” or “John died while visiting Columbus last week.”

Many contract reviewers would say that they can better answer these client ques­tions when the con­tract uses simple, even boring, language, with short para­graphs and sentences.  (And when you draft a contract, the client gen­er­al­ly wants to pay only for “good enough” language that can be signed quickly, not for elegant literary prose.)

As always, writers must keep in mind who their readers are and what those readers will be trying to accomplish. When trying to get a workable contract to signature sooner, “bor-ing!” will normally be the way to go.

EDIT: Garner tweeted that “The principle of end weight—putting emphatic words at the ends of sentences to avoid syntactic fizzle—applies almost as strongly to contractual drafting as in other expository prose. @DCToedt, you give no contrary examples.”  He attached a photo of “Not this” and “But this” examples: 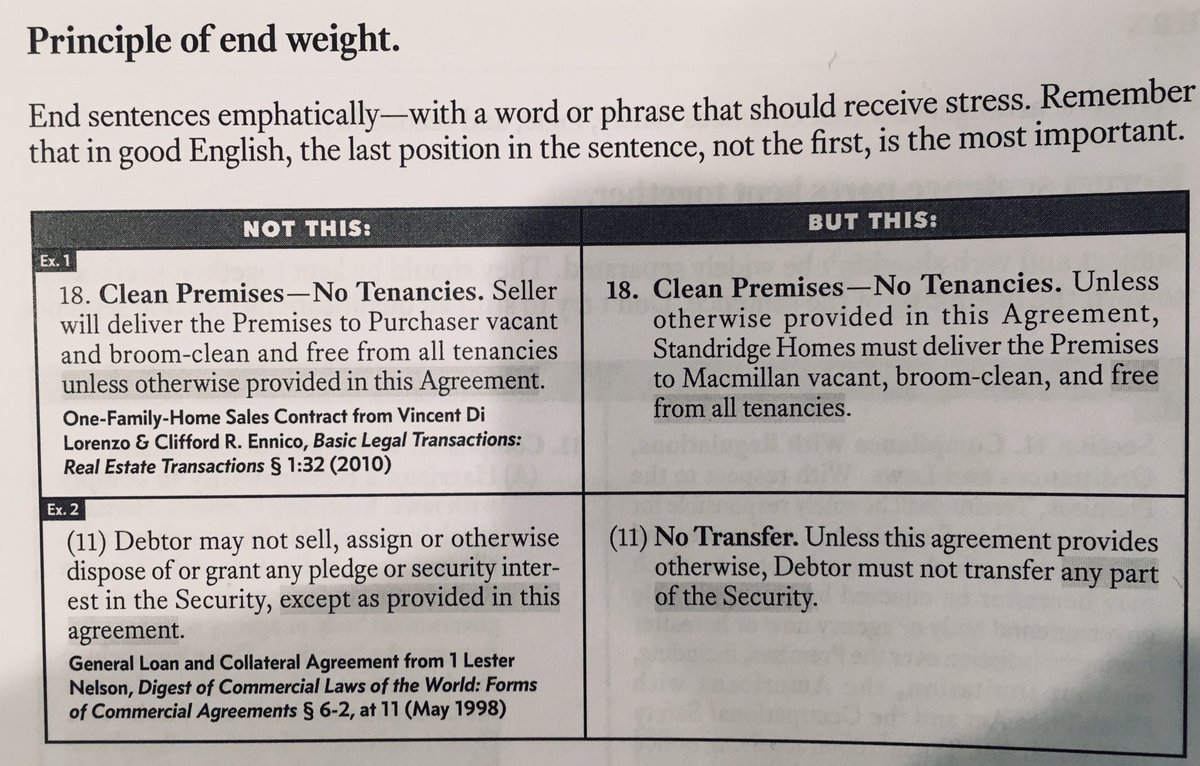 I tweeted in response: “In each of your examples, your typical overworked contract reviewer is reading as rapidly as possible and so (I claim) would prefer your ‘Not this’ example because it gets to the point immediately.”  Followed by:  “As the military briefing acronym goes: BLUF – Bottom Line Up Front.”

Previous post: How to screw up drafting an arbitration carve-out for injunctive relief (5th Cir. case)