Yesterday a client’s in-house lawyer said he really liked how I’d quickly reformatted a vendor’s contract, in Microsoft Word, to make it easier for us to do a page-turn review on a conference call. Here are some “before” and “after” screen shots to illustrate; there’s a more-detailed explanation below.

The first screen shot is a “before” version; it shows a clause from the original contract form as received from the vendor:

The second is an “after” screen shot of the same clause, after I’d expanded the margins; broken up a long paragraph; increased the font size and line spacing; and added line numbering for easier reference during conference calls: 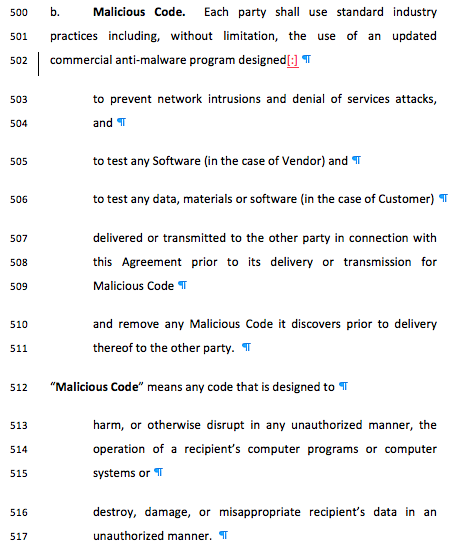 The third screen shot shows part of the forum-selection clause, with a long paragraph broken up, and with one portion flagged with yellow highlighting to indicate to the in-house counsel that this was a part that needed his review:

Explanation: What I did

Better substantive review as a result

I do this sort of thing regularly when reviewing contracts. It takes a few minutes, but it’s indisputably worth it, because:

All of these things will help you get a workable contract to signature sooner.

Drafters: Go and do likewise

Drafters could help by using some of the same formatting principles when they create contract drafts for review.

Previous post: Uber drafting tip: Got an arbitration clause? Then don’t also say exclusive jurisdiction is in some court.